My next interview from Device_art 3.009, held during October 2009 in Zagreb, today on schedule! Back then Yosuke Kawamura  presented his interactive installation Textron (2002) with electronically interlaced motifs through an old craft tool like sewing machine and digitally projected images of geometrical calculations.

Yosuke Kawamura was born in 1977 in Nagoya (Japan). His career could be divided into several branches: music/sound + installations + community work (Mobium) = Kawamura’s device_art

His works have been presented internationally, as well as part of the renowned IAMAS’s exhibition Source of Life. Textron was exhibited at exhibition entitled IAMAS: Progressive Media Art Education from Japan at Ars Electronica 2004 held under title TIMESHIFT – The World in Twenty-Five Years.

As for Textron, the IAMAS catalogue says the following: ‘By controlling the sewing machine by foot, the audience can create the image of the woven types of patterns on the extended bigger screen at the same level as the sewing machine, and also, audiences can listen to some abstract type of sounds created in matching the patterns. Textron is the new name to connect up Text or Textile with electronic.’

First, you have studied media design, then you decided to jump into device art within the IAMAS concept… tell me a bit about it…

YK: I have graduated digital media design at Aichi Prefectural University, I studied the sound, to be precise. Afterward, I went to IAMAS studying more interactive media. In 2002 I graduated at IAMAS Art & Media Labo Course. 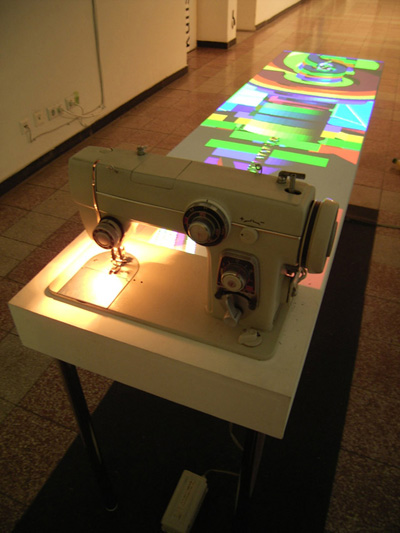 Textron is an interactive installation, but can you tell me something about the initial hint for the project, why did you use sewing machine?

YK: I’m interested in the industry of music. Sewing machine is kind of very industrial tool. So, there is a connection between my interest in the music industry and sewing machines as a symbol of industry. Hence, Textron makes textile-visions by using the movements of the needle and sewing machine itself to create a feedback, image projections and sounds like they are woven. 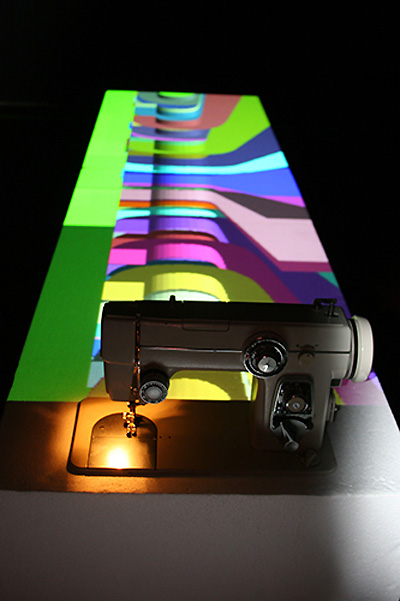 How can you live from new media art in Japan? People usually think that because Japan is a high tech society, new media artist can automatically easier make a living from it…  Do you have enough time to work on your art projects?

YK: It’s kind of difficult in Japan to live with art and media, I think. To produce artwork is one part. I’m organizing exhibitions in Japan. I have my own space to exhibit. So, this is this second aspect of our lives. In addition to that, I want to establish it professionally, so I could have, in the future, more stabile financial situation. It’s hard to live only by doing art. It’s difficult, even in Japan.

My museum Mobium is actually a bus. I’m also using technology to recreate this bus as a museum and, of course, you can drive this museum around. I also put there some sound aspects. My vision and plan is to make business using this mobile museum, involving technology. I want to combine technological aspects with the mobility. 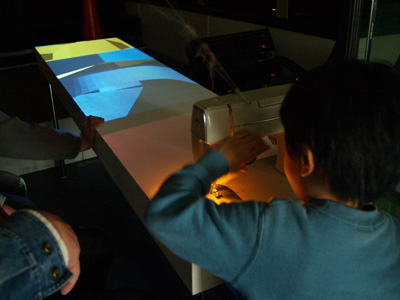 Have there been  artists that have had a strong influence on you?

YK: Marcus Popp from Oval and Microstoria, German electronica musician. That was really an impressive moment, this moment when I was listening his music. His work has made a huge impact on me. Then I realized I want to work with sound installations. 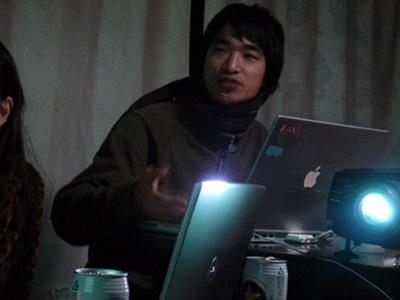 What do you think who can better understand your concepts, people from the field of device art in Europe, America, or Japan? Europe has strong new media art festivals, but there is also important scene in San Francisco, as well as in New York… But Japan is really a gadget oriented nation…

YK: Uhm, I didn’t notice these differences in perception between the continents, but I noticed some differences in other directions. I had really really good experiences while presenting Textron in small villages in Japan. So, nothing like big international festivals, but small Japanese villages with local people. They don’t know the media, that’s fascinating.

These local people… they don’t have so much knowledge or experience on art, especially on media art. So, they have very kind of refreshing and new approach to communicate with devices. When you exhibit in Linz for example, the audience is very familiar with device art or new media art.

Hence, they know well what this is, how it works, somehow they know how to deal with it. But local people always react something like Wow! They are fascinated with gadgets or devices. Probably, these kinds of fascinations make them react in a different way. It was really fascinating to experience their reactions.

Do you have some story to share with us regarding your experiences (laughs)? 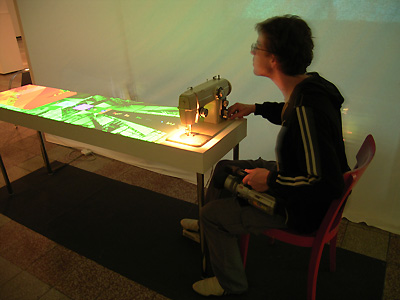 What are your future plans? Will you work more with interactivity, or more with sound?

YK: I’m very interested in textile now. The output of Textron was image, not a real textile but a projection. Hence, now I want to use a real textile as output in real time, instead of projection. So, this might be the next development of the project.

YK: At the moment I’m interested in low tech textile.

YK: The involvement of the computer, but not just to project some image on the screen using technological layer, but to make an output with the real material, is pretty interesting. I want to use computing for kind of analogue material, BUT using computers. Yeah! So, it doesn’t stay only in a digital layer, but involving analogue and tactile aspect. For me this is probably the future of new media art and device art.

(I interviewed the artist with the help of Satoshi Morita in order to avoid possible language barriers… TNX Satoshi!)

Related link: Interview with Mika Fukumori: On Ototenji and IAMAS

Will you work more with interactivity,
2 Comments